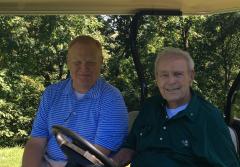 Orlando, FL -- Arnie’s Army Charitable Foundation is pleased to announce the appointment of Kevin Bingham to the role of Chief Executive Officer.  Kevin will be responsible for the continuing growth and success of the Foundation on behalf of its founder and namesake, Arnold Palmer, while working directly with his family and the Foundation Board.

“My fans and supporters, known as Arnie’s Army, have had such special meaning to me throughout my career,” says Arnold Palmer.  “That is why we have established Arnie’s Army Charitable Foundation.  And the Army has found its newest leader in Kevin.  His experience and vision will help the foundation expand its reach and grow the number of families we will be able to serve.”

Kevin brings nearly 25 years of non-profit experience to his new role.  He began his career with Boys & Girls Clubs of America and, from there, transitioned to Diversified Nonprofit Services, serving as the company’s President.

Kevin will be leaving his current position as Chief Operating Officer at the Cal Ripken Sr. Foundation where his efforts have allowed the organization to serve over one million youths in 2015 alone.  His talents and experience with the Ripken Family will be invaluable as he continues to build on Arnold’s own legacy of caring.

Amy Palmer Saunders, Arnold’s daughter and foundation President added,  “Our appointment of Kevin has been a long, thorough and meaningful process by our Board.  There was nothing more important to me than finding someone who appreciates my parents' legacy and the impact they hoped their success could have to influence the lives of others. Kevin understands our Mission and embraces our Vision by way of his past engagements and his own passion for making a difference in the lives of children for future generations.”

About Arnie's Army Charitable Foundation
Arnold Palmer’s go-for-broke style of golf bolstered a legion of fans, coined by the press as Arnie’s Army. Palmer's charisma and unfailing sense of kindness endeared him to millions around the world. Over the past four decades, the Palmer family have contributed time and resources to helping others and in so doing have made a profound impact on many lives. Founded in 2015, Arnie’s Army Charitable Foundation has been entrusted to continue Arnold’s legacy of philanthropy by investing in the health, well-being and development of children & youth. For more information, or to join Arnie's Army, please visit ArniesArmy.org.